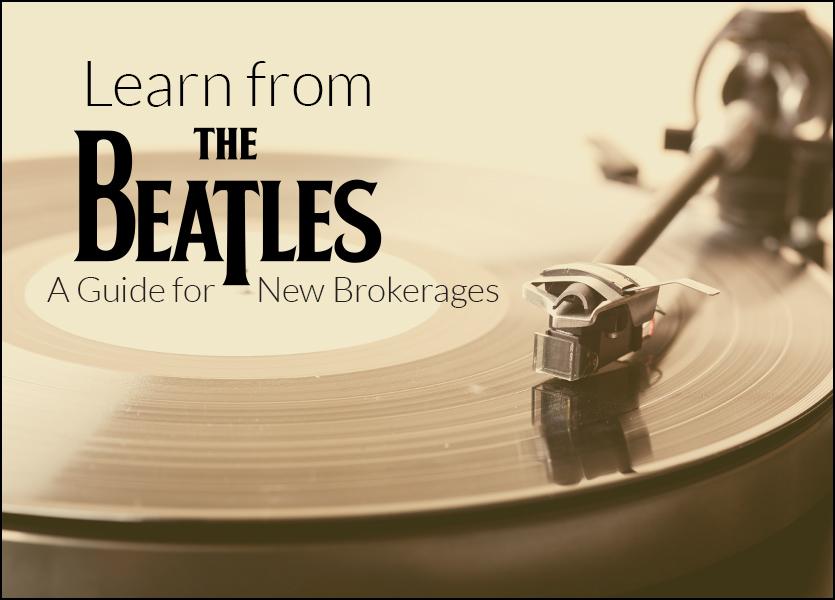 Ladies and gentleman, the Beatles!

Starting a successful real estate brokerage isn’t easy. Neither is finding success in the music industry. For over two and a half years, the Beatles performed grinding eight-hour sets in Hamburg, Germany. So how did a group of boys playing long hours in the clubs of northern Germany become one of the greatest bands of all time? I’m going to be bold and say it: The Beatles were some of the greatest entrepreneurs of all time.

So what can aspiring and new broker/owners learn from the Beatles?

Great success is nearly impossible without a great team around you. It took time for the Beatles to become the Fab Four. Stuart Sutcliffe and Pete Best were once members of the band, while Ringo Starr was a later addition. But once all the right members had come together, McCartney, Lennon, Harrison, and Starr created some of the most unforgettable harmonies and melodies of all time.

Just like a rock band, brokerages need to build around the right team. That means having the right partners, office staff, and agents. Once you find the members of your dream team, make sure you retain them! Give them visibility into your business, and the tools to be successful.

All You Need Is Love

Success in music or entrepreneurship requires a passion, a love for what you do. It took the Beatles seven years to find success. Those long sets in Hamburg weren’t painful because they loved what they did.

Want to build a brokerage with 100 or more agents? Expect to spend more than 10,000 hours on it. If you don’t love what you’re doing, those hours will seem long and tedious—but if you do, you’ll be able to enjoy the journey and love the challenges along the way.

When the mop-heads arrived in the U.S. for the first time to perform on The Ed Sullivan Show, not only did they capture the hearts of America, but they left an impact with their unique style. Hairstyles for men in the early 1960s were short and combed back, but the Beatles left their hair long and uncombed. They changed everything. The girls loved it, and the boys wanted hair just like the Beatles.

When it comes to owning a real estate business, it’s not all about what you do—it’s also about how you look. The Beatles wanted to look different. Their long hair was part of their image, their brand, and it helped set them apart from other acts in the ‘60s.

When it comes to real estate marketing, ask yourself, how does your brand set you apart? Your brokerage’s brand, which includes your logo, communication style and your mission statement, should speak to the unique value you provide. It should also differentiate you from your competitors. What does your real estate brokerage website’s design communicate to your customers? A modern-looking website that helps users easily find the information they’re looking for will leave a good first impression, just like when the Beatles stepped onto The Ed Sullivan Show for the first time.

From writing a children’s song, “Yellow Submarine,” to the incorporation of eastern sounds in songs like “Within You Without You,” the Beatles were never afraid to be different. They knew how to straddle that fine line between using what was working in music and adding their own elements to their product. The Beatles didn’t abandon western pop and rock and roll, but embraced the best qualities of those genres to push the frontier of music’s evolution in the 1960s.

When starting your brokerage, draw from the success around you. Actively listen and learn from the success stories of the brokerages around you. But also find ways to be different. Find a unique characteristic that sets you apart. For example, these three brokerages built their brokerage around social responsibility. Challenge the status quo, but don’t abandon it. Build upon it; do something that hasn’t been done before, or choose something and be the best at it.

It was the height of Beatlemania, and the Beatles could have continued touring and making great pop music. Instead, they changed themselves from a touring boy band to a recording band. Without time-consuming touring obligations, the band wrote and released the album Sgt. Pepper’s Lonely Hearts Club Band. The album was the first-ever concept album and has been dubbed the greatest, most important and influential album of all time by Rolling Stone magazine. The Beatles would continue to evolve over time and record great albums like The White Album and Abbey Road.

The Beatles were never satisfied with their current state, and always looked for ways to better their product. When starting a brokerage, don’t ever be satisfied with “good enough.” Every year, needs, values, and approaches change while new technologies are invented or become accessible. Change leaves opportunity for brokerages to generate more real estate leads as well as improve their customer experience, efficiency, and agent satisfaction.

Just like the way the Beatles competed for album sales with the likes of the Beach Boys, Rolling Stones, and Bob Dylan, there’s always another brokerage competing with you for clients and agents. The Beatles were great innovators in incorporating new techniques and technologies into their music. What can you do to improve the real estate technology in your brokerage [link to blog or product pages] and resist the test of time?

In 1962, the Beatles debuted their first single, “Love Me Do.” They would go on to release 13 albums and 236 original songs in a span of eight years—the equivalent of composing and recording a new song every two weeks. In comparison, U2 has released 13 albums over 38 years. When you consider the lyrics, creativity, technological feats, and overall quality of the Beatles’ music, their productivity is truly amazing.

So how can you set up your new brokerage to be as productive as the Beatles? Well, don’t waste time. Get an awesome real estate transaction management platform that lets you process transactions quickly. Get real estate software that both your agents and staff can use. Make sure you reduce data entry as much as possible.

Success comes from productivity. Without releasing as many albums and singles as the Beatles did, they would not have remained the most popular band throughout the 1960s. When it comes to your brokerage, always look for ways to improve your efficiency through technology and processes.

Sometimes, you just can’t do it alone. The Fab Four didn’t just get by on their own. They knew when they needed help. In 1960, the Beatles were without a drummer, so they hired Pete Best. When they were recording their Let It Be album, George Harrison invited keyboardist Billy Preston to alleviate tensions the band was experiencing at that time, and add some more depth to their music. And of course, when it came to recording, they hired George Martin. Martin quickly became the “Fifth Beatle,” and was one of the first producers ever to view a recording studio as an instrument. Without George Martin, the Beatles wouldn’t have been the Beatles.

When starting and growing your brokerage, there are times when you’ll need to get outside help, whether that’s a little help from your friends, an outside marketing team, or IT technician. Hiring outside help brings gives you access to expertise that would be hard to develop internally, and is often much cheaper than hiring another full-time staff member. Check out this great resource that specializes in real estate accounting software for brokerages.

Know When to Move On

The Beatles had done it all. Eleven of their albums reached number one on the UK charts. They revolutionized music. They were (and still are) the best-selling band in history, selling more than a billion records.

They also knew when to call it quits.

By 1970, the relationships among McCartney, Lennon, Harrison, and Starr had deteriorated, and the four were ready to pursue solo careers. After releasing the single “Let It Be” in March of 1970, McCartney announced his departure from the group and the subsequent break-up of the group. Rather than regress to producing poor music, they maintained the band’s legacy and reputation, and all went on to have very successful careers as solo artists.

After starting and growing your brokerage, there will come a day when it is time to pass the torch. It’s best practice to continually analyze the financial performance and health of your brokerage. This is easiest when done through real estate–specific financial reports. When the time comes to sell your business, pass it along or move on, this information is essential in helping you through this transition period.

Know of anything else we can learn from the Beatles? Let us know in the comment section below!